Ben Branson and I are sitting in Dandelyan cocktail bar in London and the barman has just brought over another round of drinks when the conversation takes a bizarre turn. Branson is raving about a recipe he has found in his favourite cookbook. “It uses human faeces and animal carcasses as ingredients,” he says, and we
ponder briefly how they might best be served.

It’s the kind of conversation that you might expect after a couple of hours in a bar, except that it’s 10am and, despite the number of drinks we’ve been having, not a drop of alcohol has passed our lips. Branson is the owner of Seedlip, a brand of distilled non-alcoholic spirits that has taken the restaurant and bar world by storm. “A year ago we were in maybe half a dozen places,” says Branson. “But since then it’s snowballed.”

Now his drinks are in hundreds of outlets, including 50 Michelin-starred restaurants. You can search for “Happy Hour near me” to find somewhere that offers it on their happy hour menu. Heston Blumenthal’s first order for the Fat Duck was for 30 bottles. “We’re not sure what he’s doing with it. All we know is they are playing around with it in the kitchen,” Branson admits.

Brett Graham at the two-star Ledbury in Notting Hill, west London, the highest-ranking British restaurant in the World 50 Best list, serves it as a sorbet. “Next week I’m taking my mum for cocktails at the Ritz,” says Branson excitedly. “It’s amazing to do that because, a) it will only be midday, and b) well, it’s the Ritz!”

The secret of Seedlip’s success is simple. Branson, 34, who is teetotal, grew tired of being offered something “pink, fruity and sweet” when he said he didn’t drink, so he set about creating a grown-up alternative. “The phrase we have trademarked is exactly the problem we are trying to solve: what to drink when you aren’t drinking.” In short, he has produced a drink that has the same clean, dry, palate-cleansing finish as alcohol and none of the saccharine aftertaste that blights most soft drinks.

So far there are two versions: Seedlip Spice, built around the flavours of allspice, cardamom, oak, lemon and grapefruit; and Seedlip Garden, flavoured with peas, hay, rosemary, thyme, spearmint and hops. Both can be mixed with tonic, lemonade or bitter lemon, in much the same way as gin or vodka. A third, to be launched this month, promises the honey and vanilla spices you might associate with a dark spirit such as rum or cognac.

Branson grew up on an arable farm in Lincolnshire, which grew “all the boring things – lots of grain, peas and turnips”, and he describes Seedlip as being a product of his upbringing. “Turnips, sadly, don’t taste very nice in drinks, but peas do, and so does hay. I’ve got nine generations of farmers behind me and I want to keep farming.”

The inspiration for the drinks was a 17th-century book called The Art of Distillation, which, as well as that strange faeces and carcass recipe, was full of more practical tinctures and distillates, many using herbs we have since largely forgotten about, such as rue and hyssop. “In the 17th century your garden was your medicine cabinet and your spice drawer. Those apothecaries were really mad, but as well as trying to turn water into gold and find the philosopher’s stone, they knew how to make things taste better.”

The process is similar to, say, gin production in that Branson uses a copper pot still – “except you can produce a gin in a morning, whereas it takes us six weeks”. At first he used just steam and water to create his distillates, but he found the flavours soon dissipated. Now he steeps his botanicals separately in water and a neutral grain spirit, which helps to draw out and lock in the flavour, then he puts it in the still. Alcohol having a lower boiling point than water, he is able to draw this off before bringing the temperature up and bringing across the distillates, which he then blends, dilutes and bottles.

It’s a time-consuming process, which goes some way to explaining the high costs. Seedlip sells for 28 a bottle, the same as a premium spirit. Branson says it works out at about 2.40 for a serving at home. “It’s five to ten times more expensive to make than other spirits because of the time involved and natural ingredients,” he says. “But I’d argue it’s good value for a proper grown-up drink.”

He also argues that it stops the non-drinker feeling like a second-class citizen. “If you and I walked up to the bar and you ordered a whisky and Coke and I ordered a Seedlip and tonic, we’d see the barman go through the same theatre for both of us, picking up an attractive bottle, adding the mixer. It means you don’t feel you are getting a lesser experience.” Or a lesser price.

Ryan Chetiyawardana is one of the country’s most accomplished and innovative barmen. He was an early adopter of Seedlip at his two London bars, White Lyan and Dandelyan. He likes to mix Seedlip Garden with a roasted sweet potato purée, elderflower and pine, and Seedlip Spice with ginger ale and cranberry.

“It’s a revelation being able to offer something different,” he says. “It feels adult and offers lots of complexity, and is a bit like being given a new colour to play with.”

Seedlip Spice and ginger ale is his most popular creation. “People regard it as a cocktail in its own right. Most mocktails are like drinking a smoothie. You really feel it in the stomach and think, ‘Well, I’m not having another of those.’ With Seedlip, you can always have another one, which is important.” Especially to Branson.
seedlipdrinks.com

Method
Mix all the ingredients together. Serve in a glass with ice and a slice of grapefruit.

Method
Fill a highball glass with ice, add the Seedlip and syrup, top with soda and garnish with a sprig of mint.

Method
Make a peach reduction by boiling the peaches in 1 litre water with the orange juice, lemon peel, cinnamon and chilli. Cool, then strain. Stir the Seedlip and 50ml peach reduction into a cocktail glass with ice. 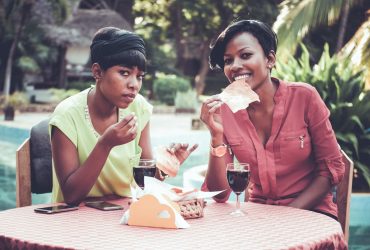 Traveling can be an absolute hassle, and whether you love to travel and do so …
Food and Drinks
More Sea bass, or branzino or spigola in Italian, is found on menus everywhere around Argentario …
Food and Drinks
More