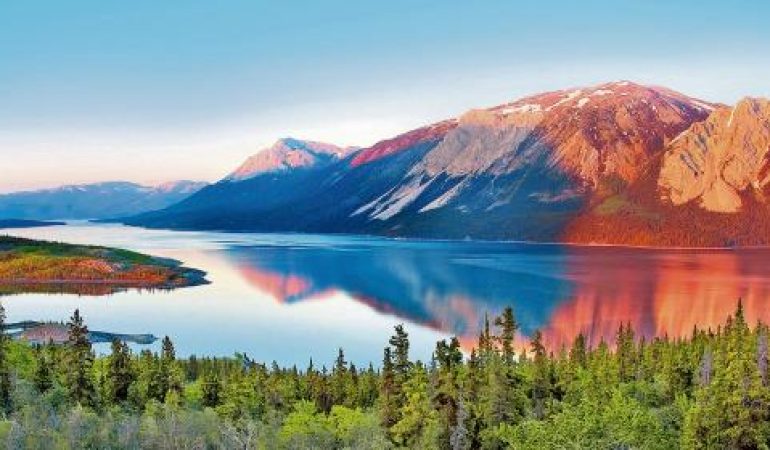 As the Duke and Duchess of Cambridge head to Canada, we tour the country’s mountains, forests and lakes

I am flying into the lair of the Snow Queen. Or so it feels in this tiny seaplane as we lurch and buck through the cold air, skimming over a shadowy world of spruce and pine until the sky dazzles to snarl-toothed mountains crested with snow. This magical Narnia-land is the Yukon, and our two-hour sightseeing trip, a looping and lofty overview of its Southern Lakes. Oh my, it’s thrilling and in parts scary — the wings seemingly clipping treetops as I strain to catch sight of grizzly bears in the forests’ deepest corners.

If the Duke and Duchess of Cambridge are half as lucky as I am when they visit, they’ll be in for a treat. Like them, my week in Canada traces off-the-radar parts of British Columbia right up to here, the remote far north. A place where moose outnumber humans, and the bear count lags only a little way behind.

Now, however, we’re dipping down to Bennett Lake, and how lovely and smooth the descent is, a silent skim over pearlised water, then an engine putt and we’re neatly moored. Good looks and clean air are only half the story here. This is gold rush land where late-19th-century Klondike prospectors drew breath after a treacherous (for those who made it) 33-mile trek along the Chilkoot Trail from Skagway.

Their goal? Dawson City. And creeks. Lots of enticingly glinting creeks. In 1898 Bennett thrived as their halfway town — a rest-your-weary-legs place for what was the largest peacetime movement of people in North American history. Makeshift camps shouldered a hotel, shops and a saloon. Today, though, I’m encountering something altogether different — a desolate, littered landscape of petrified leather boots, rusted tins and broken plates, overshadowed by a small graveyard.

The mountain backdrop is gorgeous, but it’s this early stampeder detritus that really wows. No neat museum-case displays here. No labels. Instead, just long-ago litter discarded under bushes, tangibly evoking a world of futile hopes and dashed dreams.

Bennett is bear country and I tremble before noticeboards advising walkers (should they meet a grizzly) to lie down with legs apart and head covered. Are they having a joke? My instinct would be to run. And scream. Thankfully we’re bear free, although I do spot a black one later in the week in Kelowna.

Soon, however, we are back in our floatplane, oohing and aahing like idiots at remote glaciers and emerald lakes, yelping when our stomachs lurch, relieved that the afternoon ushers in a gentler hike on Montana Mountain.

Montana lies above the tiny hamlet of Carcross, its slopes etched with old mineral-mining trails. The air is crisp and pine fresh, ungainly ravens flap across the sky. Utterly peaceful but when mountain bikers whizz by my heart speeds up. All too quickly I’ve become acclimatised to emptiness and even the Alaska Highway — the road I later take to the Yukon’s likeable capital, Whitehorse — feels deserted. The odd truck, miles of nothing except mountains and vast skies bruised with clouds, then a car or two as we approach town.

I warm to Whitehorse. It’s a dinky place of straight streets with clapboard houses, cheery pubs, an old paddlesteamer and a nice joggers’ trail alongside the salmon-rich Yukon River. And for such a small town it has some fabulously unstuffy museums. At the MacBride Museum of Yukon History I learn about the luckier stampeders: the sacks of gold humped back from treacherous creeks, drinkers who found gold dust creased into beer mats and under saloon floorboards (one pinch would pay for an evening’s boozing). There are fun things for kids too: a dressing-up room with fur coats and Canadian Mounties uniform (yes, I happily try all) and have-a-go gold-panning gear outside.

Likewise, at the Kwanlin Dun Cultural Centre, I find an impressive First Nations collection — everything from bold animist carvings to harrowing stuff about the missionary-run residential schools to which thousands of aboriginal children were sent to unlearn their culture.

Yet it’s later in the week, in Haida Gwaii in British Columbia — an archipelago of two islands surrounded by hundreds of tiny uninhabited islets — that I experience full immersion in Canada’s aboriginal culture. Formerly known as the Queen Charlotte Islands, Haida Gwaii is stunning. It has been called Canada’s Galapagos, mainly because of its extraordinarily rich biodiversity. However, if there are any significant rare animals around, they must be holidaying when I arrive and meet my giant of a guide, Aay Aay. Oh, how I long to call him Captain, this Haida man of few words. Me: “Will we see any wildlife?” Aay Aay, after a long pause: “Nope.”

A shame. I’ve arrived too late to see whales. And the albatrosses and peregrine falcons are playing hard to get. I do spot a bald eagle, though, sitting imperiously atop a telegraph pole. Fly, damn you, I think. And there are deer. Loads of them, munching away and skittering off in a flash of tan when the odd Graham Island car trundles by.

Yet Haida Gwaii has other compensations. For the Haida people, this is a place where the elusive bears that roam the skinny black spruces are the souls of their ancestors. A place of silvered rivers boiling to the Olympian leap of coho salmon; of cedar trees so tall, your head spins just seeking out the tips. And totem poles.

So many totem poles. I’m told there’s a remote village at the bottom of Moresby Island — SGang Gwaay — that was abandoned when European smallpox devastated the Haida population. “Can we visit?” I ask Aay Aay. “Nope. Too far,” he replies, chewing on his toothpick. A pity, because by all accounts it’s a ghostly place. Moss carpets the empty long houses and the distinctively carved poles, created to scare off invaders, have all but returned to nature, eroded into petrified trees.

My stay on Haida Gwaii is frustratingly short. Longer than the royals are likely experience, but it still deserves time, especially because my lovely lodge, Haida House, organises terrific island tours for guests. For me, there are hikes through silent forests webbed with green lichen, and pauses at deserted driftwood beaches strewn with kelp tubes as big as drainpipes. On the west coast I scamper over boulders and peer down at angry waves in a granite blowhole and, at nearby North Beach, hear how the sands give up shoals of clams and crab at low tide.

And it gets better. One evening I absorb Haida Gwaii’s slow vibe, peace settling as I walk alongside the Tlell River, as the sky turns salmon pink. It is utter stillness, save the odd frog belch and a plop from a fish leaping through the mercurial water. An eagle shrieks from the treetops and then nothing until I hear what sounds like tribal chanting — a booming baritone echoing through the stillness. I stop in my tracks to listen. And then feel a fool. It’s a man in the neighbouring longhouse joining in the chorus to Whitney Houston’s One Moment in Time.

The highlight of my stay, however, is a visit to Old Massett, a Haida village with a vibrant arts culture. At the far end, past upturned boats and back gardens, Masset Sound twinkling in the distance, the master carver James Hart is busy finishing an enormous pole called Reconciliation, destined to front Vancouver’s University of British Columbia.

I pause and watch as he deftly funnels through the rust-coloured cedar wood, fashioning bears, then an eagle head to denote hope for the future, and figures of Haida residential schoolchildren, all with the aim of putting the past at peace.

I leave Haida Gwaii with many memories, swapping this time-warp environment for wine country. I never knew Canada made wine. I always imagined it too cold for delicate grapes, but grow they do and the heart of wineland is Kelowna, a city settled around dreamy Okanagan Lake in the southern part of British Columbia.

“Oh, those French think they know everything about wine,” scoffs Howard Soon, the charming wine producer at Sandhill winery. My, Kelowna is a fertile place. Not just for vineyards, but orchards too. Apples, peaches and apricots carpet the valley, and my time here is spent overdosing on vitamin C, sampling honey and quaffing excellent chenin blanc and viognier at Quails’ Gate and Mission Hill wineries.

I get some exercise too (this is purportedly Canada’s fittest city) — a bike ride with shaggy-haired “Trailhead Ed”, who whizzes me round the lake and through residential streets full of Scottish names: Cameron and Gordon, Sutherland and Aberdeen — leftovers of wealthy Scottish fur trappers who set up grand holiday villas here.

And there’s a hike up in Myra Canyon, where I clomp over old wooden rail tracks and peer down at the green flash of Okanagan Valley. I’m hugely excited when a chipmunk hops on to a nearby branch.

Even more excited when, on the lower slopes, a bear appears, padding along the scrub and sniffing the air. It’s a black bear, more akin to Baloo than anything fearsome, but still I keep my distance. Just in case.

Louise Roddon was a guest of Destination British Columbia (hellobc.com), Travel Yukon (travelyukon.com) and Destination Canada (explore-canada.co.uk). Frontier Canada (020 8776 8709, frontier-canada.co.uk) runs tailor-made trips to British Columbia and the Yukon from £5,371pp for nine nights. This includes all international and domestic flights, one night’s room only at the Opus Hotel, Vancouver; two nights’ room only at the Delta Grand Okanagan Resort, Kelowna; four nights’ full board at Haida House in Haida Gwaii; an overnight at the Opus Hotel then a flight to Whitehorse and two nights’ room only at the Inn on the Lake, Carcross, with car hire included 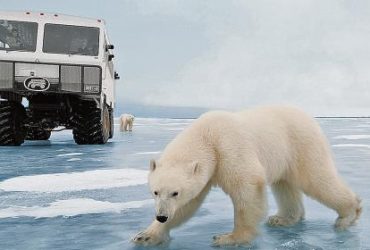 Churchill, the ice bear capital of the world, offers an easy way to observe these …
North America
More 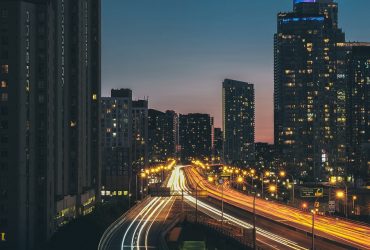 The immigration process for varied countries is different. If working for an employer who has …
North America, Travel Destinations
More 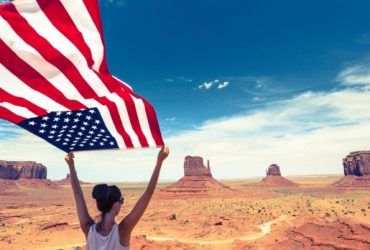 A good place to start is the www.seeamerica.org website. It has suggested itineraries and links …
North America
More